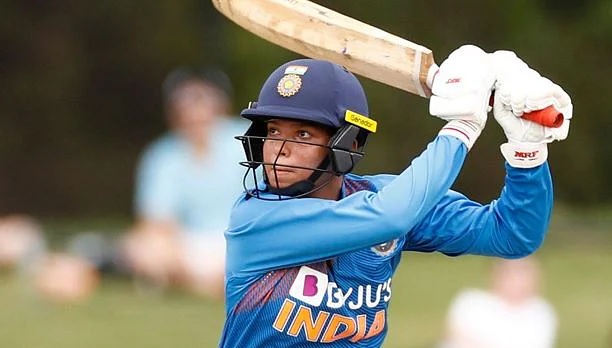 At the age of 16, most of the child worldwide either do their projects or discuss with their parents or teachers which stream they will select so that they can succeed in their future. At this age, if someone says the word “boards” to them most of them will feel pressure, anxiety, fear and tension. But Richa Ghosh was different from any other teenager. At the age of 16, Richa used to play cricket for the Indian National Women’s Cricket team and she was part of the T20 World Cup squad which reached the finals that year.

Richa Manabendra Ghosh, commonly known as Richa Ghosh in the cricket circuit is just 16 years of age and plays for the National Indian Cricket team. She was born on the 28th of September 2003 in Siliguri in West Bengal, India. Richa is the daughter of Manabendra Ghosh, her father and Swapna Ghosh, her mother. She plays in the Indian Women’s team as a frontline wicketkeeper-batter.

At a very early age, her father understood her interest in sports and without any hesitation, he enrolled her daughter Richa in the Bagha Jatin Athletic Club where once he also used to play for them. At that time there was no team dedicated to girls in the club so she had to play with the boys. As she was the only girl in the entire club, this could be a bit uncomfortable for her but as we said previously that she was not just like any other normal teenager.

Richa in her early days used to bat extremely fearless against male fast bowlers this made her sometimes mistakenly appeared in the U14 or U19 male team. In several interviews, her father also accepted that all things about her daughter that is from learning cricket to joining the Indian national team have been done pretty fast which was quite pleasant for them as parents.

Richa’s domestic career started at a very young age. When she was just 11 she got the chance to play for the U19 team and she used to play in the U23 team when her age was only 13 years. In the 2017-18 season, Richa got selected for the Bengal’s women’s cricket team and due to her several match-winning performances, she soon became a very important member of the team and became a premium young batter from Siliguri.

At the end of her inaugural year with the Bengal team, she won the 2018 award of the Bengal cricketer of the year for her stellar performance. In the 2019-20 season final match, she played a very important, calm and mature innings for her team. In that final, they were playing against a very strong Railways team where she along with their very senior all-rounder Rumeli Dhar made a great partnership and helped Bengal to reach a respectable score of 121 runs.

After her stellar performances at the domestic level, she soon gets the chance to play in the India B team under the captainship of Smriti Mandhana for the Senior T20 Trophy. That series was very important for her because T20 World Cup was very soon and she could get selected if she performed well in that trophy.

In that trophy, she played 4 matches and scored 98 runs which all came from batting lower down the order in the team. Her performance could seem not that promising but her style of playing, her intent and her versatility were enough to satisfy the Indian team management.

The two stand-out performances of her in that tournament were once when she came to bat when the team was reeling at 20/2 against India C team and soon after she came to crease it became 26/4 and from there, her 25 runs innings helped the team to reach the target at 94/8 on a very slow pitch.

Another performance was she came to bat at 36/2 when both their most vital batters, Jemimah Rodrigues and Smriti Mandhana went to the pavilion. But then everyone saw her aggressive intent when she hit for two boundaries and a straight six after 2 wickets were fallen and she was new to the crease. She helped the team to back on track and she ended her innings at 36 runs from 25 deliveries. After that tournament, Richa praised the entire India B team and how they helped her at every moment so that she can feel comfortable and confident.

In January 2020, Richa was selected for the Indian squad which was flying abroad to play a Tri-Series and in that same year, she also got selected for the T20 World Championship team of India.

She earned her place in the Indian squad for the T20 World Championship because of her performance in the Challenger’s Trophy. After her selection, she said that finally, her dream of playing for India come to reality.

Richa’s interest in cricket came from her father because he also used to play cricket in that same cricket club but later he became an umpire. At his time his father used to play as an all-rounder. Richa’s father, Manabendra was her very first mentor in her career.

When she started playing cricket her father used to teach her batting skills along with that he also used to inform her about daily cricket news, changes and laws that will help Richa to understand better.

In 2016, her father Manabendra shut down his business so that he can take care of her daughter. Richa remembered that always and she paid her father back by playing good cricket and getting selected for the national team which is the biggest achievement for any kind of sportsperson.

Richa Ghosh is a very big fan and follower of Sachin Tendulkar. She aimed to become like Sachin in future. But she is still now very young and she had a long future left ahead. Many people are there who are pretty interested in women’s cricket but do not know where to watch cricket latest update today also. There are various online platforms available and you can also watch on television also.

Know all about cricket news and updates at CBTF news.

Get the fastest cricket news update at https://cbtfspeednews.com/.

Know all about cricket betting and updates at CBTF betting.

Get the updated expert betting tips at https://cricketbettingtipsfree.com/

Checkout our videos to get the latest updates about cricket and betting tips, and casino

tips to win big with expert opinions at https://www.cbtfmytube.com/.

List of Tower coolers and their Specifications by Crompton

Air Coolers have become vital home items because they keep the room and workplace cool ...
By Levi Luke
March 2, 2022

3 Factors Not To Overlook While Hiring Movers

Hiring a moving company to move your house or office from one place to another ...
By Levi Luke
November 10, 2021
Home

In today’s age, modern design houses increase in demand and the reason is that it ...
By Levi Luke
May 12, 2021

Remodeling ideas at home to make more room in your home

Home Renovation Projects: Transform your home during the weekend